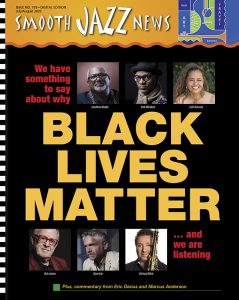 Sometimes someone else covers a subject with such insight and substance that directing others toward them seems like the best way to cover the story. This is how I feel about the most recent edition of one of our most respected heritage publications, Smooth Jazz News. They have devoted the July-August edition to Black Lives Matter and made the entire edition available at no charge on their website. Opening with an insightful piece by publisher Melanie Maxwell who shares how her pespective has changed and deepened as awareness has been raised then featuring in depth conversations with both black and white musicians about their experiences with racism and their perspectives on how we can change it and work to end it. Many of these artists are parents and/or grandparents too so they reflect the effect on future generations. These are not blurbs either. They are lengthy, in depth conversations. Sharing their insights are: Jonathan Butler, Kirk Whalum, Gail Jhonson, Eric Darius, Marcus Anderson, Bob James, Dave Koz, and Richard Elliot.

The jazz community has always been ethnically diverse and global – fans, artists, media, management, support staff, everyone. We show up in all colors and most touring bands are racially mixed, as are the audiences. If you have ever been on a tour bus that stopped for a snack at a backroads gas station or even tried to check in to a high-end hotel you see up close the racial divide – how people who enter a place together are not all accepted or treated the same way. The black musician who decides to take a walk around the block near his posh hotel and gets stopped for being “suspicious.” My friend the white female tour manager of a band composed of black men who was on the receiving end of snide comments, lurid winks, and looks both questioning and full of disdain. Not in the mid 20th century jim crow south. No, this is happening in this century, in this year.

Much love to Ms. Maxwell and the SJN staff and writers Marcia Manna and Ken Capobianco for creating this work. I won’t say “enjoy” because this is deep, thougthful stuff. Enjoyable in the sense of a good read about musicians we love but also about an issue we care deeply about and must do the inner and outer work to fix. Click the link above or the cover picture.  Read, Think, Act.