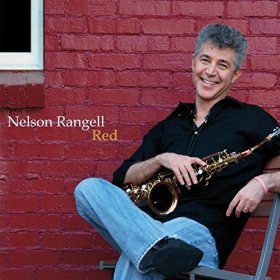 It’s like this. It took my breath away from the minute I hit play on track 1. This beautiful keyboard line that holds a promise that unfolds over 10 fabulous songs. This is what contemporary jazz used to sound like before the exciting elements were smoothed off the top. Nelson Rangell did it beautifully as a fearless virtuoso player back when edgy touches and progressive elements were allowed and he’s doing it now with the additional skill and seasoning that comes over time. In other words, Red is a definitive album. Melody, musicianship, emotion and originality all wrapped up in a 10 song set that never falters. This one is half of the show, too. Rangell simultaneously released this one, the contemporary outing that continues to develop his trademark sound, and Blue, an album that features him on flute exploring an intriguingly eclectic set of songs.

What I love about Red is the same thing that made his Yes Then Yes album one of my all time favorites – the songs all sound so big and full: whether it’s a ballad or blaster this music has presence. It grabs your attention and captures a spectrum of moods. Rangell is so good at expressing emotion through his instrument and with his arsenal of skills the impact is powerfully beautiful. There’s a sense of freedom in “Point of Departure,” of contemplation in “Some Next Grace,” edgy joy in “Nelly’s New Thing,” soaring energy in “The Red Pill” and spirited subtlety in “From Here.” This isn’t sonic wallpaper, it engages you. Just listen to the intro to “Smoothly Sinister,” a sax line that is enticingly pure whether he’s playing high and fast or hitting the low notes. It’s a tease into a song that busts into a catchy melody over a deep funk backbeat and some breakneck solo riffs that Rangell pulls off without losing clarity or tone. This spins into “Nelly’s New Thing” – a place where funk meets fusion with some latin flavor and a kickin’ bass line on the side. And there are songs like “Another Way” that sound just familiar enough to lure you in then take off into all kinds of melodic spins and knockout solos.

There are so many magical moments where texture, melody and unpredictable twists spice up the songs – the radiant keyboard lines, the little whistle in the middle of “From Here,” the bursts of strings on “The Red Pill,” the many “wow” moments where you are amazed that he can play that fast, hold a note that long  (and know just when to let it go), and add so much nuance to songs with such a variety of tempos moods. This is the ultimate example of what a mass appeal contemporary instrumental album can be when the artist expands the potential of the music instead of working within format driven constraints. The majority of the songs are over five minutes long, which gives the players the time and freedom to add a lot of meat to the bones, but it’s never excessive.  You actually want these songs to last longer. There is, of course, an obvious way to make that happen. Buy the album, hit repeat a lot or play it through then play it again. When complexity meets artistry in such an accessible place you’ll hear new things every time you listen and the whole vibe is so bright and joyous it will lift your spirit every time you hit play.

It’s been a while since we heard from Rangell and he opted to take the road less safely traveled – going indie and releasing two albums on the same day. In the case of Red and Blue (which will be reviewed shortly) high risk yields high rewards.