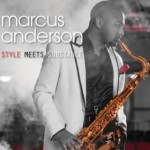 On Style Meets Substance Marcus Anderson has done something that few artists have managed to pull off. He has created an album that is fresh and thrilling without completely jumping off the smooth jazz ship. Let’s face it, a lot of genre albums are a bit formula driven and many of the players who want to push the boundaries simply jump the ship altogether. What we have here is redefinition from the inside out, exactly the kick in the groove that we need. Before everything got smoothed out the really strong contemporary instrumental albums coverd a lot of turf. They included uptempotracks, soulful slow jams, background and foreground vocals, and some steps off the beaten path. This album has all that and more. A lot more, because not counting the brief and perfect intro this album has 12 strong songs and none of them sound alike. This guy plays his heart out and his butt off and he can write! These aren’t riffs and loops with some solos wrapped around them. These are songs that will stick in your ears and have you making up your own words just so you can sing along.

The album opens with a tasty intro –a little string synth thing that builds nicely and flows straight into the title track which kicks fierce and hard with a driving backbeat and a riff that sounds like the theme from “Shaft.” Anderson comes in playing fast and strong taking the song into one of the amazing melodic hooks that anchor all of these songs. I love the way the first two songs transition. There is no break, just a build into a thumpin’ bass and wah-wah guitar and Anderson playing a little more toned down straight into another anthemic hook. Then we get one of the most elegant slow jams ever, “You Made My Day.” His sax absolutely sings this song with all the emotion a strong vocalist could wrap around a lyric. In this case you can let your imagination run with it while you soak in this gorgeous arrangement. “Just for You” follows, keeping the chill vibe going with Anderson on soprano over soft percussion and acoustic guitar. So how do you shift back into power mode? You take a textural side trip to Bollywood with “The Taste of Passion,” complete with Middle Eastern chordings and percussion and sitars backing layered saxes. Then there is the guitar solo. Pure rock fusion over a slow building fire of string synths. Very dramatic, very original, totally cool and just when you think it has peaked it shifts to a funky bellydance groove breakdown. How bout a little tribute to PRINCE? That’s in it too on the appropriately titled “Paisley Red” which plays off snatches from some of his most memorable hits straight into another Marcus Anderson hook. “Your Wish Is My Command” sounds like it came straight from the classic Philly Soul ballad songbook with a good helping of retro instrumental nuance. This is how you do old school withoutt drowning in nostalgia and oh, yeah, there is another stunning electric guitar solo at the end.

Anderson is fearless and the spirit here is joyous! He wrote these songs, produced them, plays a lot of the instruments, and totally goes for it on every song. He’s not afraid to play hard and intense on a ballad or throw a rock guitar solo in an unexpected place. He can go loud and fast without ever losing tone and clarity and he’s not afraid to sing a little either, which he does on “All About You” or go completely pop/rock on the closer “No Worries.” No worries indeed!. And…every song on this album is gonna lift you up, whether it’s a ballad or an off the hook energized jam. These songs just have that thing, a melody and a mood that are gonna make you feel good.  Here’s one thing you should probably know. He is spending a lot of time on stage with PRINCE as a part of his band right now. You don’t get to that place without having style, substance, presence and skills. With Style Meets Substance Marcus Anderson shows he’s got all that and more.  Shannon West