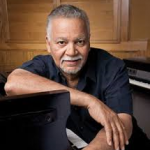 Friday night. Actually Saturday morning. I was binge watching Grey’s Anatomy on Netflix. A girl’s gotta have her escape hatch after another 8 hours in that spiritual black hole known as the “daytime job.” I could have just let the next episode start and fallen asleep face flat on the computer and found out when the sun was up but nooooo (said in that voice Steve Martin used on those classic SNL episodes) I had to check Facebook one more time. The first thing I see is a post from musician Patsy Moore that simply states “Joe Sample. No. No. No. No. Crap!” 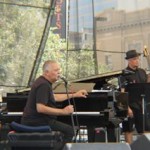 Joe Sample was a thread in my cjazz DNA. I remember walking around campus carrying the Crusaders’ Scratch album  like a badge. We all did that, carried some book or album around so people could see how cool and ahead of the curve we were. It was their live album, one of those that broke ground because it wasn’t recorded in some hipster jazz club in New York City. They were playing The Roxy, the Sunset Strip music venue known for showcasing rock bands. It was and still is an amazing piece of work and it did the work on a college girl level too – a cute guy stopped me and told me he had just bought it too, we started talking, were a couple for a year and are friends to this day. By the time Rainbow Seeker came out I had a “jazz fusion” show on my college station and to tell the truth this one jumped out of the incoming mail stack because the title and the cover picture were so artsycool in that late 70s sense. Solo Joe standing proud and centered. Little bit different from the Crusaders sound but that artistry and originality were in full effect. Beyond that there was a feeling, this intangible can’t verbalize it feeling you got when you listened. It made you feel like a…Rainbow Seeker. He stalked me musically and spiritually through all these years of radio shows, record stores where I would sneak his albums into the instore play stash that was overloaded with hyped top 40 hits, concerts, rradio conventions, articles, and an ongoing stream of adventurous albums.

But never an interview. Too shy. Too intimidated. I jokingly told a friend “I can’t talk to him, he’s smarter than me.” Which was of course another reason I loved him. He was a brilliant, articulate, independent thinker. He spoke his mind even when everyone was afraid to say what they really thought. Even when getting on the wrong side of industry politics could kill your career. When not being deferential to influential radio consultants or and power brokers got your music pulled off the air, then your record company would cut you and concert promoters wouldn’t book you. The invisible “gag order” that quieted most didn’t hush him at all and his songs still managed to sneak onto playlists on the momentum of sheer quality and essential goodness. And oooh he told some “war stories” from the stage. They had us all thrilled and laughing but not believing he would share such personal stuff with a few thousand people he didn’t know in a voice that made us feel like we were sittin’ in a dive bar at 2am having a free for all chat.

I could elaborate on this album or that concert for pages and pages. He was in the game for a long time and I have been too, but two encounters sum it up for me. After his set at the Jacksonville Jazz Festival – I’m thinking it was 2008 – he came over to talk to the cluster of media people gathered by the side of the stage. I was in stricken, shy and awe mode so I kinda stood back while others talked to him. He looked my way and said “hey, come say hello!” and gave me a hug like I was some old friend he had never met. Although we had met about 15 years before and that is the other story. He was touring with Al Jarreau in 1992. It was about a week before Christmas and I made the drive to Orlando to see them. After the show a bunch of us went back to the hotel to hang out in the bar. Some private party had taken it over so we set up camp in this little conversation pit in the lobby that had a piano in the center. The entire area was covered with little white Christmas lights, red velvet bows and garlands, all the way up as far as you could see. We were a little cluster of fans and musicians kicking back and talking in the center of it. Very seasonally festive but Christmas season was hard for me because my dad had died abruptly from a heart attack a week before Christmas a few years before. Then Joe just got out of his chair, walked over to a piano, sat down and started playing this beautifully complicated stuff that just flowed naturally while he told stories and joined in multiple conversations. The people who were lingering in the lobby as the office parties wound down were drawn to the man and the music. How could you not be. It was the first time I had felt in synch with the holiday season in quite a few years. We were family for that moment – businesspeople dressed for success who might have had one or two too many, a couple who had been arguing loudly and now held hands quietly, some music junkies who were stunned by the fact that they were in the presence of people they had only expected to see from Row 32 Seat 16, and in any crowd there is someone who is grieving or scared and not letting it on.

We find our tribes, even if they are momentary. We have these moments that we always remember. We are all temporary and we are all more vulnerable than we would want to imagine. When we share the experience of being a fan and loving an artist and the music they create we are more alive and more connected than ever. We will be during this grieving process that is lightened by the glorious stories we will share and the music we will revisit and start to talk about again. Always, The Song Lives On.